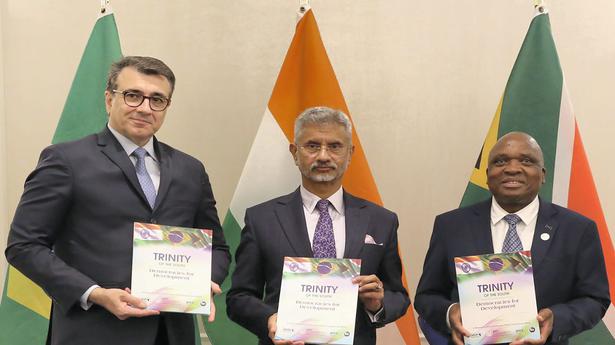 IBSA (India, Brazil, South Africa) has become a key tripartite grouping for promoting cooperation in a range of areas

IBSA (India, Brazil, South Africa) has become a key tripartite grouping for promoting cooperation in a range of areas

India, Brazil and South Africa jointly expressed grave concern over the ongoing conflict and humanitarian crisis in Ukraine, reiterating their call for an immediate cessation of hostilities and pursuing the path of diplomacy.

External Affairs Minister S. Jaishankar on Wednesday hosted the 10th meeting of the India-Brazil-South Africa (IBSA) Trilateral Ministerial Commission with Brazilian Foreign Minister Carlos Alberto Franco França and Dr. Joe Phaahla, Minister of Health of the Republic of South Africa. on the sidelines of the session of the UN General Assembly

Read also | PM Modi has an influential voice on the world stage, hail his intervention: UK

“Ministers expressed their deep concern over the ongoing conflict and humanitarian crisis in Ukraine. They reiterated their call for an immediate cessation of hostilities and the need to continue on the path of diplomacy and dialogue. that the current world order is anchored in international law, the Charter of the United Nations, the sovereignty and territorial integrity of States,” according to a joint statement issued after the 10th meeting of the IBSA Trilateral Ministerial Commission.

IBSA (India, Brazil, South Africa) has become a key tripartite grouping for promoting cooperation in a range of areas.

The three leaders also underlined that while comprehensive reform of the United Nations system remains a crucial international undertaking, advancing the reform of the Security Council, the principal organ responsible for the maintenance of international peace and security, must remain a priority priority, especially since the reform of this body has remained elusive, according to the press release.

Ministers renewed their commitment to work towards expanding the membership of the Security Council to include representation from emerging and developing economies in Asia, Latin America and Africa in the permanent and non-permanent categories to achieve a representative, inclusive, equitable, responsive and effective UN Security Council representation that reflects contemporary global realities, he said.

They even agreed that the current composition of the UN Security Council no longer reflected the realities of the contemporary world and that reform of the UNSC was essential.

Regarding climate change, they reaffirmed their commitment to the United Nations Framework Convention on Climate Change (UNFCCC), its Kyoto Protocol and the Paris Agreement. They urged all countries to work together for the implementation of the Paris Agreement based on the principles of the UNFCCC, including the principles of “equity” and “common but differentiated responsibilities and respective capabilities”, according to the press release.

They urged developed countries to fully honor their official development assistance (ODA) commitments and provide new and additional financing and the means to implement the SDGs, the statement said.

The eradication of poverty in all its forms and dimensions, including extreme poverty, must be aligned with national efforts and international cooperation as it represents the greatest global challenge and an indispensable condition for sustainable development, they said. recognized.

They also expressed concern over the continued public health, social and economic impact of the COVID-19 pandemic around the world and in particular in the Global South and called for better international preparedness to combat the COVID-19 pandemic and other current and future health challenges. , including by mobilizing political and popular support, as well as the necessary financial and technological resources.

The leaders also appreciated the significant progress made in the development and distribution of the COVID-19 vaccine and called for increased cooperation between different stakeholders to ensure the timely availability of a diverse portfolio of vaccines to all those who need it, at affordable prices, it said.

They called on all countries, international agencies and philanthropic organizations to procure vaccines and boosters from manufacturers in developing countries, including in Africa and among BRICS countries.

India is the outgoing Chairman of IBSA and will host the 6th IBSA Summit on the sidelines of the G20 Summit in November 2022.