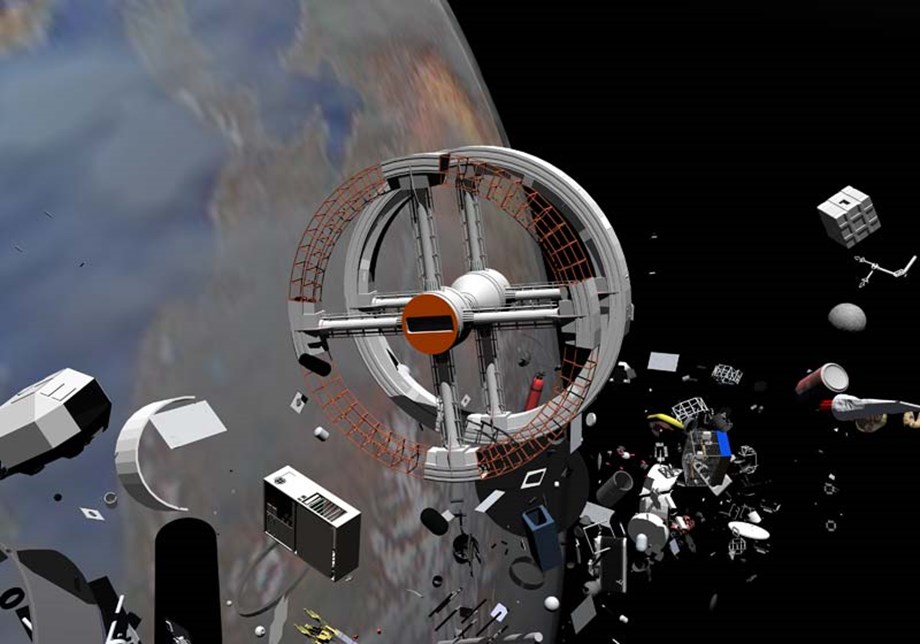 Responsibility for cleaning up space can be modeled on climate change mitigation strategies.

Satellites orbiting the Earth provide essential services to humanity. They connect us via the internet, they help us with mapping and GPS, and they monitor our changing climate, among other things. But “space junk” threatens our use of satellites. Downgraded satellites or their dislocated parts can lead to a chain reaction where small pieces of debris tear apart large objects in a cascading event creating more and more debris. Responsibility for space debris removal is an environmental issue similar in some ways to climate change – it is a collective responsibility. And just as the management of climate change is assisted by satellites, the management of satellite debris can be assisted by climate change. Like climate change, the problem of space waste can only be solved through international cooperation. The United Nations Framework Convention on Climate Change, signed at the Rio Earth Summit in 1992, was the first and most complex instrument of international law to combat climate change and can provide information on how to manage space waste. The convention includes a principle called common but differentiated responsibilities (CBDR). It states that “States should be held accountable for different actions based on their respective historical and current contributions to the creation of global environmental problems and their respective capabilities to address those problems”.

All space activities are threatened by contamination from space waste. The plans of nations that do not yet possess the resources to engage in space activities may be rendered meaningless, even if only the space objects still in use are considered. Countless missing objects obscure Earth’s orbit, and their numbers continue to grow. When they develop the means to do so, these nations may find that they can no longer exercise their right to explore space. Philosophers throughout history have pondered how best to coordinate international cooperation and decision-making. In Perpetual Peace: A Philosophical Sketch (1795), Immanuel Kant considers the repercussions of mankind entering into a universal community where violations of the law in a certain part of the world are experienced everywhere. Envisioning the world as a federation of states promoting international trade and abolishing war, Kant proposes “cosmopolitan law” as the foundation of global society to secure lasting peace. Kant’s ideas influenced the creation of the League of Nations as well as the contemporary United Nations.

In 2002, the International Criminal Court (ICC) was officially created. He introduced a new version of cosmopolitan law that transcends Kant’s concept. His version reflects the tendency of international law to weaken the sovereignty of states or the fact that an individual is subject to their national laws. It gives people rights and responsibilities under international law.

Nations share common experiences, such as climate change, and depend on the same global prices. Weapons in transit to other countries affect the lives of people on the other side of the globe. International relations specialist Anthony Burke speaks of a “common space of life and death that we have created”. He argues that “globalized human existence” should be understood as “a networked whole of interdependencies and obligations across all borders”.

Such a global society system would contribute to long-term human security. Nations and their armed forces should behave responsibly towards future generations and the sustainability of the global ecosystem.

Burke recognizes that the pursuit of universal values ​​and global goals would require the transformation of states and international law. Power and cooperation on global issues would be reconfigured. He refines Kant’s concepts simply as follows: “act as if the principles and consequences of your action become global, in space and time, and act only in such a way as to bring closer a safer life for all human beings “.

Developing an international legal instrument for space waste mitigation would extend the concept of sustainability from Earth to outer space while shifting the issue of orbital debris in a cosmopolitan direction. New laws could follow the architecture of the Kyoto Protocol and the accountability principle that underpins it. The liability principle was designed to tackle global environmental problems and is therefore perfectly applicable to space waste – a global environmental problem. Nations that have only recently launched their space activities, or are planning to do so, face environmental degradation for which they are not responsible. The fair way forward is for nations responsible for space waste to clean it up. This agrees with the United Nations Committee on the Peaceful Uses of Outer Space when it states that “mitigation of existing debris should take into account the [responsibility] principle”.

(This story has not been edited by the Devdiscourse team and is auto-generated from a syndicated feed.)