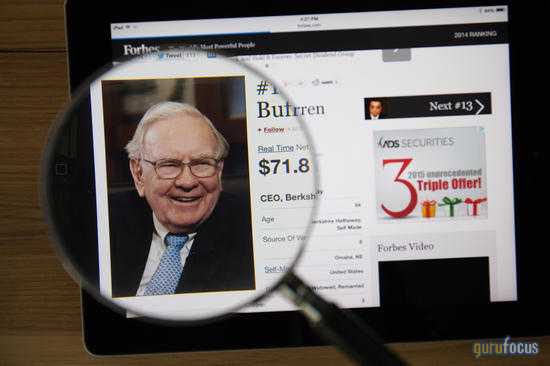 Continuing my examination of

warren buffet (Trades, Portfolio) of the first letters to shareholders, let’s take a look at the letter from 1967.

The first thing to note for 1967 is that Berkshire Hathaway (BRK.A, Financial)(BRK.B, Financial) changed its fiscal year to a calendar year, so the 1967 letter covered the 15 months up to December 30, 1967.

In the textile activities, it was another difficult year and the company reduced its production by around 15% to avoid building up stocks. Buffett notes market research that indicated demand for Berkshire cotton fabrics was gradually being replaced by polyester blend fabrics.

During the year, Berkshire continued its policy of expanding into higher value categories of the textile market such as home fabrics and launched a garment fabrics division, to move away from the “direct competition with commodity fabric producers” – in other words, looking for higher margin, less commoditized businesses.

Buffett noted the trade-off between the higher unit costs of lower production and greater diversification, versus the benefit of higher prices for higher value products. Clearly, Berkshire, under Buffett’s leadership, had thought carefully about the optimal product mix in terms of generating profitability.

Buffett notes that Berkshire’s operating loss carryforward had been fully utilized, so expected 1968 profits would be subject to normal federal income taxes.

Berkshire decided to shut down its cotton turf business, given the continued lack of demand and the fact that rising cotton prices could not be passed on to product prices. Since the equipment could not be converted to other uses economically, Buffett notes that it is difficult to predict the loss associated with the cessation of this activity that would be incurred the following year, but predicts that it will be less than $1 million, before tax.

1967 was a pivotal year for Berkshire. While on the one hand the restructuring and rationalization of textile operations continued, the company bought two insurance companies: National Indemnity Company and National Fire and Marine Insurance Company, of which Buffett says he is very satisfied with their results since their acquired in March 1967.

Buffett notes that the underwriting was completed with a good profit margin and the profits would be reinvested in the business to build capital strength:

“Our investment in insurance companies represents an important first step in our efforts to achieve a more diverse base of purchasing power.”

Buffett is not writing off the textile business and notes that management is alert to growth opportunities in any sector as long as earnings on invested capital are positive, unlike what Berkshire experienced from 1956 to 1966 when the earnings on a capital base of $30 million, overall, were negative.

Liquidity is not held in cash, but in readily tradable common stock. Buffett notes that the company is also willing to borrow money to take advantage of attractive opportunities. The objective of the company is simply to ensure a stable and decent profitability in relation to the capital employed.

Buffett seems to be focused on the facts of this letter. He reports operations as they are and he is not married to the textile industry, in fact he expanded areas that looked more promising but quickly closed down problem areas. The shift to insurance is simply because yields are higher than textiles. The guidance seems reasonable while acknowledging the uncertainty. Rather than exiting textiles altogether and putting everything into insurance, Berkshire is more interested in diversification to smooth out the cyclicality of a business to ensure a strong capital base. This is perhaps the first sign of Buffett’s patience and long-term approach.