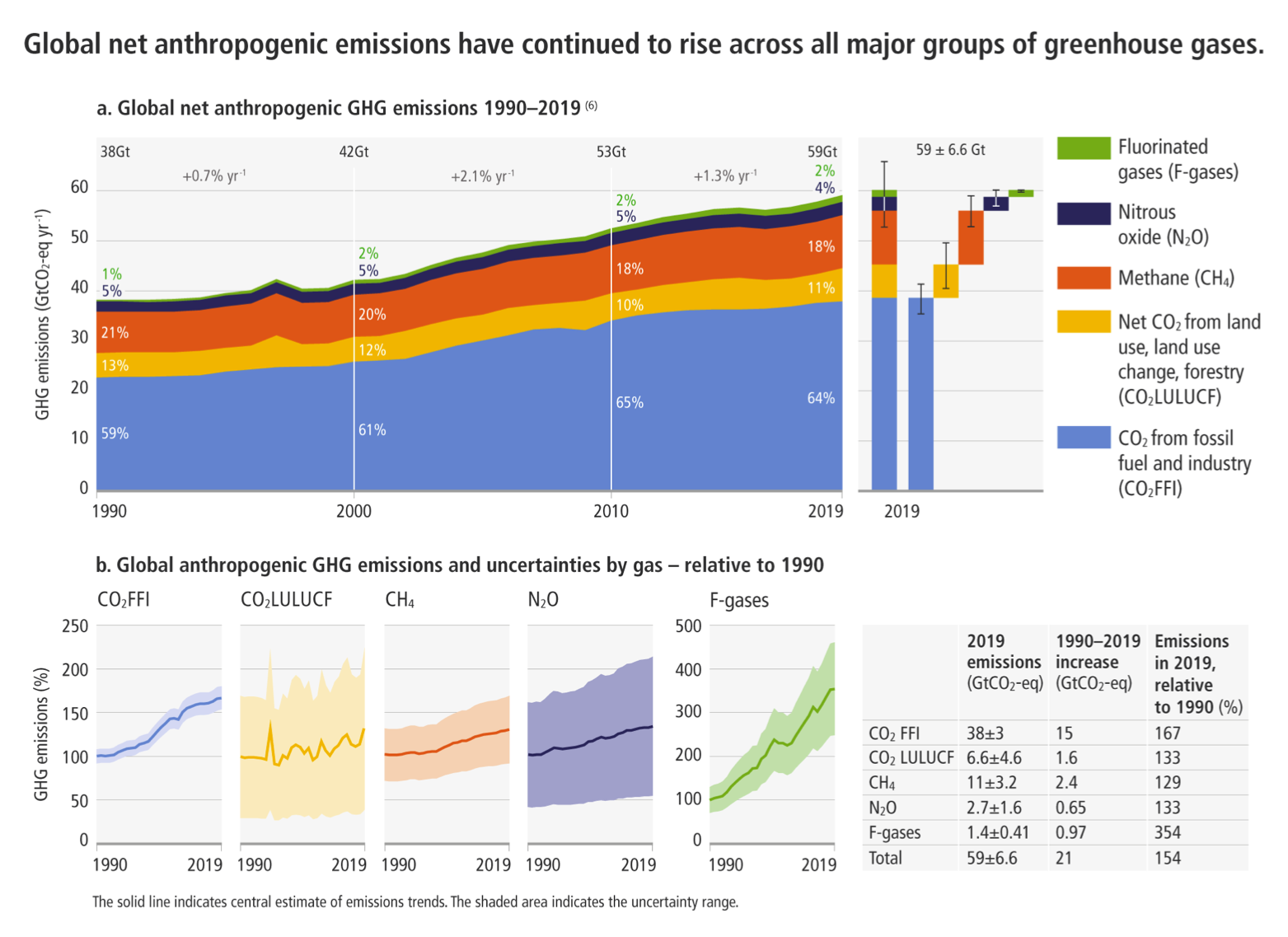 The causes and effects of climate change are global – carbon emissions all over the world endanger people everywhere. As a result, since 1979, climate and weather extremes have caused 2 million dead and growing economic losses. Moreover, in the future, climate change expected to cause 250,000 deaths per year.

However, despite the urgency of climate change, global efforts to mitigate climate change have been ineffective. The question is, why? In this article, we use economic principles to comment on the existing international climate governance architecture and propose the reasons for this ineffective climate action.

The atmosphere is a common global resource – it functions as a greenhouse gas (GHG) sink. Since the industrial revolution, the increase in anthropogenic emissions (mainly due to the burning of fossil fuels) has changed the Earth’s energy balance and caused global warming. Reports show that human activities have warmed the Earth by around 1.1°C: compared to 19e century. In reality, 2021 has been one of the hottest years on record.

Consequently, this human-induced warming contributes significantly to the frequency and intensity of extreme weather events that threatens lives and livelihoods. Some recent examples include strong heat waves in Australiathe United States and Canada at floods in Europe and China at extreme droughts in ethiopia and tropical cyclones in Southeast Asia. However, although climate change is a pressing concern; Global efforts to mitigate climate change (measures taken to avoid and reduce emissions of heat-trapping GHGs) have not produced the expected result.

In addition, between 1995 and 2021, 26 United Nations conferences on climate change have been organized. They resulted in the production of climate treaties like the Kyoto Protocol and the Paris Agreement. Nevertheless, the GHG index increased by 41%since the 1990s. For the year 2021, “global energy-related carbon dioxide emissions rose 6%’ to 36.3 billion tonnes, their highest level on record.

Why did this happen? The answer lies in the economy.

What is the free rider problem and how does it apply to climate change?

In the contemporary economy, public goods have two characteristics: they are “non-exclusive” and “non-rival”. In simple terms, they are goods accessible to all, and its enjoyment by one user does not prevent others from using it.

Climate Change Mitigation (CCM) is a global public good. Indeed, if India undertakes mitigation efforts to reduce its GHG emissions, it cannot “prevent” China from reaping the benefits of its efforts – whether or not China reciprocates with a similar policy. . However, notably, the costs are borne only by the country implementing the green policy (eg India).

Moreover, this “non-exclusive” feature of climate change mitigation creates a free rider problem – a case where a country receives the benefits of reduced GHG emissions without contributing to the costs. A country implementing a green policy bears 100% of the cost – either in the form of adopting low-carbon technologies or other short-term transition costs to switch to cleaner energy – but receives lower benefits (compared to the costs incurred). Mainly because the benefits of climate change mitigation cross national boundaries due to the global nature of the atmosphere.

This ripple effect creates strong incentives for many nations to freeride at the expense of others. Ironically, this motivates them to invest resources in national goals whose benefits do not spill over national borders. When a number of countries follow such acts of rational self-interest; the result is a collective catastrophe – unsustainable exploitation of the environment. Moreover, it is rather unfortunate that the existing international climate governance architecture has failed to address this free rider syndrome.

The problem of international climate agreements and what needs to change

Under international law, there is no legal mechanism to deal with the free riding syndrome – because international agreements are voluntary arrangements. As a result, they lack strong incentives to penalize withdrawal from an agreement or non-compliance with commitments. In the climatic context, the result is anarchy.

Powerful countries choose to cooperate only if a proposed new agreement serves their interests. For example: the United States, a major emitter, did not ratify the Kyoto Protocol on the grounds that it was unfair to industrialized countries – leading to its silent death. Similarly, on the issue of lack of incentives, the current Paris Agreement – ​​which aims to limit global warming preferably to 1.5°C above pre-industrial levels – relies primarily on countries to design and implement up-to-date commitments (or nationally determined contributions) that do not have legally binding obligations.

Climate change is an urgent threat requiring decisive action. Communities around the world are already experiencing heightened climate impacts, from droughts to floods to rising seas. The World Economic Forum’s Global Risks Report continues to rank these environmental threats high on the list.

To limit the global temperature increase to well below 2°C and as close as possible to 1.5°C above pre-industrial levels, it is essential that businesses, policymakers and civil society advance short-term and long-term global climate actions in line with the goals of the Paris Agreement on climate change.

This includes the Alliance of CEO Climate Leaders, a global network of business leaders from various industries developing cost-effective solutions for the transition to a low-carbon, climate-resilient economy. CEOs use their position and influence with policymakers and corporate partners to accelerate the transition and realize the economic benefits of a more secure climate.

The result is that most countries make significant pledges at conferences, but most of them lack national political support. For example, at the 26th meeting of the Conference of the Parties in Glasgow, UK, China (the world’s largest emitter) pledged to achieve carbon neutrality by 2060 but gave almost no detail on how, raising concerns about its viability. Not surprising, the world is on track for 2.7°C warming which will profound impacts on lives around the world.

Above all, the current framework lacks teeth to fight against free-riding because it does not impose any sanctions in the event of violation of the conditions. It also has no governing body or international tribunal to enforce its compliance. In 2020, the United States withdrew from the agreement without consequences and then rejoined after 107 days. Professor William Nordhaus’ proposal to create a climate club model eliminating free riding – using the right incentives to induce cooperation could be a step in the right direction in finding a solution to the problem. The model shows how a club of nations can price carbon and impose trade sanctions (via a uniform percentage tariff) on all non-participating countries to internalize transnational externalities.

The European Union’s Carbon Border Adjustment Mechanism (CBAM), designed to prevent carbon leakage, is quite similar as it uses trade policy to create the right incentives for climate protection. It is certainly a step in the right direction to achieve net zero GHG emissions by 2050. However, the Russian invasion of Ukraine will affect the pace of negotiations around CBAM. Thus, immediate structural changes are needed to discourage acts of rational self-interest to ensure that efforts by blocs like the European Union are not wasted.

Utkarsh Leo, Lecturer in Law at the School of Justice, University of Central Lancashire