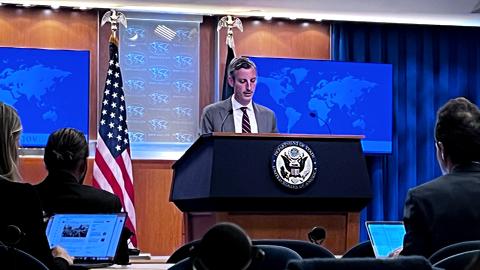 There is no alternative to the Black Sea grain export initiative that Ankara negotiated, the State Department spokesman said, adding that the United States wants Russia agrees not to target ships in the area.

Turkey is in a strong position against the United States on the Black Sea grains deal, a State Department spokesperson said after Russia suspended its participation in the agreement brokered by Ankara, raising fears of attacks on Ukrainian exports and the specter of a global food crisis.

Price said the UN’s announcement to suspend operations to monitor the movement of grain in the Black Sea has led to uncertainty. “We’ll have to see how long that lasts,” he said.

Price has said he doesn’t think there is an alternative to the Black Sea grain export initiative and Washington wants Russia to clarify that it will not target ships carrying grain to the region.

Price said the United States was looking for “just a statement [from Moscow] that the ships will not be subject to military operations,” Price said.

Turkey, the UN, Russia and Ukraine signed an agreement in Istanbul on July 22 to maintain Black Sea grain exports after they were halted following Russia’s aggression against Ukraine on February 24 .

On Saturday, Russia ended its participation in the deal following a drone attack on the Crimean naval port of Sevastopol that it blamed on kyiv. Since then, Moscow has demanded “real guarantees” from Ukraine before going back on the agreement.

Moscow also on Monday withdrew its coordination with the Istanbul-based Joint Coordination Center – an observatory where Ukrainian, Turkish, Russian and UN delegations monitored the movement of grain-laden cargoes.

Senior Turkish and American diplomats are expected to speak

Ankara has been at the forefront of helping bring about a lasting peace between Ukraine and Russia and wants the grain deal – which has seen more than nine million tonnes of food grain exported since early August. – remains unscathed.

Putin told Erdogan that Russia could only consider resuming its participation after a proper investigation was carried out into a drone attack on its naval port. Moscow is also asking for guarantees from Ukraine that it will not use the “humanitarian corridor for military purposes”.

Meanwhile, Turkish Defense Minister Hulusi Akar contacted his Russian counterpart Sergei Shoigu, noting that the two countries are evaluating available information regarding the deal and ways to keep it active.

Meanwhile, the State Department’s Price said World TRT that US officials have had low-level conversations with Turkish officials regarding the Black Sea Grains deal and he expects senior US diplomat Antony Blinken to speak with his Turkish counterpart Cavusoglu “in the next days”.

Can nature-based offsets be traded? | Nature and Article 6 carbon markets at COP27