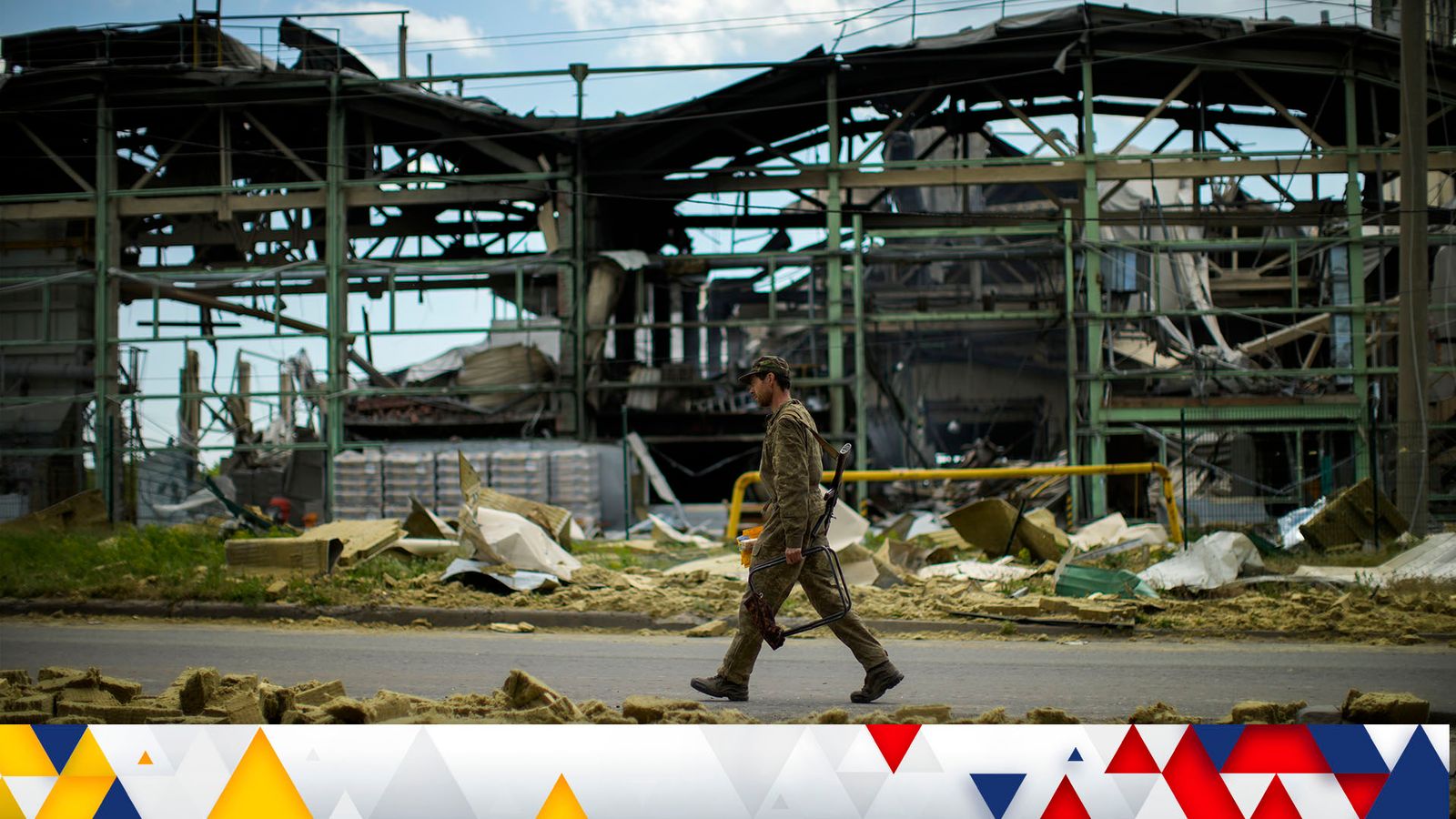 Russia has demonstrated its readiness to leverage global food security for its own political purpose, according to the UK Ministry of Defence.

In its daily intelligence update, the MoD said on Sunday that Russia would then blame the West for “any failure”.

The ministry added that Russia’s attempt to obtain a reduction in the severity of international sanctions “also highlights the constraints the sanctions place on the regime”.

Kyiv has accused Russia of blocking agricultural exports from Ukraine, known as the “breadbasket of Europe”.

Earlier this week, Russian Deputy Foreign Minister Andrei Rudenko said the country was ready to provide a humanitarian corridor for ships carrying food through the Black Sea in return for the lifting of sanctions.

He also asked Ukraine to clear the area around the port of Odessa to allow the passage of ships.

It comes after French President Emmanuel Macron and German Chancellor Olaf Scholz urged Vladimir Putin in a call to lift the Russian blockade of the port of Odessa to allow Ukrainian grain exports as the conflict has ramifications beyond the borders of Ukraine.

The Kremlin said Mr Putin had told them he was willing to discuss ways to allow Ukraine to resume Black Sea grain shipments.

Ukraine is a major grain exporter – so blocking its exports threatens to lead to global food shortages.

• Peace talks between Ukraine and Russia remain stalled
• Russia’s Gazprom continues to ship gas to Europe via Ukraine
• 6-year-old boy, who lost his family in Ukraine, writes an open letter to Boris Johnson
• Russia claims to have taken the city of Lyman and is closing in on Severodonetsk
• Ukraine began receiving Harpoon anti-ship missiles from Denmark and self-propelled howitzers from the United States

Elsewhere in the telephone conversation, MM. Macron and Scholz urged the Russian leader to release the 2,500 Ukrainian defenders of the Azovstal steel plant currently being held by Kremlin forces, the Elysee said.

Last week, the Russian military declared Azovstal and all of Mariupol “completely liberated” and reported that more than 2,400 fighters had emerged from the last pocket of Ukrainian resistance in the besieged city.

Fighters in need of medical attention were taken to a hospital in the Russian-held town of Novoazovsk, about 30 miles east of Mariupol, while others were taken to Olenivka.

President Volodymyr Zelenskyy said in a television interview that he believed Russia would agree to talks if Ukraine could regain all the territory it has lost since the Feb. 24 invasion.

Although he rejected the idea of ​​using force to reclaim all the land his country has lost to Russia since 2014 – which includes the southern Crimean peninsula.

“I don’t believe we can restore all of our territories by military means. If we decide to go down this path, we will lose hundreds of thousands of people,” he said.

Russia steps up its attacks in the East

Russian forces on Sunday intensified their assault on the largest town held by Ukrainian forces in the eastern Donbass region.

It comes as Kyiv said it remains hopeful the longer-range weapons it desperately needs will soon arrive from Western allies.

Mr Putin’s forces have made slow and steady gains in Donbass, eastern Ukraine, in recent days, marking a subtle change in momentum in the war, now in its fourth month.

They are now on the verge of seizing the entire Luhansk region after it became one of the Kremlin’s most modest war targets, abandoning its assault on the capital, Kyiv, in the face of Ukrainian resistance.

The Russian Defense Ministry said its troops and allied separatist forces have full control of Lyman, the site of a railway junction west of the Siverskyi Donets River in Donetsk.

However, Ukrainian Deputy Defense Minister Hanna Malyar said the battle for Lyman continues, according to the ZN.ua website.

Sievierodonetsk, about 60 km (40 miles) northeast of Lyman on the east bank of the river and the largest city in the Donbass still held by Ukraine, came under heavy attack.

He added that the shelling was so heavy it was not possible to assess casualties and damage, although two people were killed on Saturday and 13 other buildings in the city were destroyed.

Mr Gaidai said Ukrainian troops might have to withdraw from the town to avoid capture, but it was unclear if they had started to withdraw.

Ukraine needs weapons from the West

In a late-night video address, Zelenskyy expressed hope that Ukraine’s allies would provide more weapons, adding that he expected “good news” in the coming days.

His adviser, Oleksiy Arestovych, said: “The weapons we desperately need will most likely be delivered soon.”

Meanwhile, Ukrainian MP Kira Rudik will meet UK ministers next week – including a meeting with the defense committee on Monday.

She told Sophy Ridge on Sky News this morning that she would be asking for a wide range of missiles, which is ‘something we absolutely need to make sure we fight the Russians’.

“The second point is the visa exemption for Ukrainians” because “few people enter”.

Ms Rudik said she would also discuss the attempt to unblock Ukrainian ports, as many countries struggle with high food prices.

There has been no shortage of growth recently for TechTarget’s (NASDAQ:TTGT) capital returns