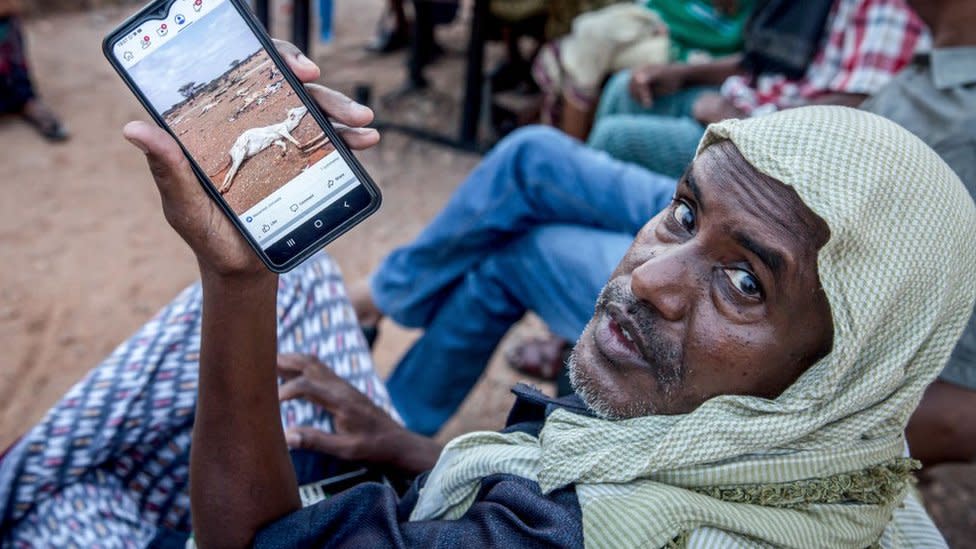 Africa has been hit by 14 extreme droughts in the past two years alone – far more than any other continent – and the UN is warning that some 20 million people are at risk in East Africa this year after the rains have once again failed.

It was therefore fitting that Côte d’Ivoire should this month host the summit called by the UN on the devastating effects of the three Ds – drought, desertification and land degradation.

However, few results were achieved during the two-week meeting in Abidjan to deal with these crises.

Many African countries have pushed for a legally binding global agreement to tackle droughts – something like the Kyoto Protocol launched in 1997 to cut carbon emissions, sources told the BBC.

Uganda and Angola were among the states to amplify demand from the African bloc.

But they wanted it not to be seen as a problem for Africa alone – they wanted the drought to be treated as a global problem, to ensure that it received global attention.

They argued that droughts were fueled by climate change, and that only global action can make a difference, although in the case of Africa, land degradation and desertification have made the situation worse.

“We believe that if all parties to the UNCCD [United Nations Convention to Combat Desertification] are on board to address this crisis under a legally binding instrument, we can help communities that have been affected by, or are vulnerable to, drought to become resilient.”

But the proposal did not garner support from other parts of the world. They argued that there were already other global pacts and mechanisms to deal with the crisis – such as the United Nations Convention to Combat Desertification, the Sustainable Development Goals or even the Paris Agreement on the climate – and that the creation of another instrument would be of no use.

Argentina and the Dominican Republic – representing Latin America and the Caribbean – said increased efforts, including financial and technical support, were needed to help countries combat drought and desertification, while the European Union (EU) said existing mechanisms should be used to avoid duplication.

In the end, there was a compromise – an agreement to postpone a decision for two years and form an intergovernmental working group that will look at ways to focus on proactive drought management.

It will report by 2024, by which time the three Ds are expected to become a bigger issue.

The meeting also agreed to restore one billion hectares of degraded land worldwide by 2030. However, some fear that this ambitious goal will not be met, like similar previous goals.

Loss of land leads to conflict

A report unveiled at the meeting, Drought in Numbers, showed that of the 23 countries that experienced drought emergencies in the past two years, the majority – 14 – were in Africa.

“Africa has suffered from drought more frequently than any other continent with 134 droughts between 2000 and 2019, 70 of them in East Africa,” he said.

The latest report from the Intergovernmental Panel on Climate Change showed that droughts have increased in parts of Africa, and it predicts a further increase.

Two-thirds of Africa is desert and arid, so it has limited productive land to begin with. To make matters worse, 65% of productive land is already degraded, according to the UN.

The productivity of the land has been severely eroded mainly due to its unsustainable use for agriculture and increased food production.

Studies have also shown that Africa loses four million hectares of forest every year and that charcoal production remains a major threat to forests in many countries.

In addition, the UNCCD indicates that 45% of Africa’s land area is affected by desertification and more than half of this is at very high risk of further desertification.

“We are seeing more and more difficult conditions every year,” said Patrick Youssef, regional director for Africa of the International Committee of the Red Cross.

And the spread of the desert means increased competition for the best land, leading to conflict.

“Intensified land degradation, desertification and drought have resulted in the loss of pasture and water in places like [the] in northern Mali and herders have to encroach on the agricultural lands of other communities,” Youssef said.

Give land to farmers

Since 1999, most African countries have developed regional action plans to combat land degradation and desertification.

But an analysis released last year by the Food and Agriculture Organization of the United Nations and an African Union development agency found that there was not enough progress.

Another report released just before the summit indicated that only between 4% and 20% of the original goal of the Great Green Wall initiative has been achieved by 2020.

The initiative was launched with great fanfare in 2007 to restore 100 million hectares of land by planting millions of trees, restoring grasslands, vegetation and wetlands in 11 countries, stretching from Senegal across the west coast of Africa to Djibouti in the east by 2030.

“It should not be surprising that rural people have no incentive to protect and sustainably manage what they do not own and what they have no legal right to benefit from,” he said.

But ownership alone will not solve the problem. Climate change is increasingly contributing to droughts.

The current drought in East Africa and the Horn of Africa has put up to 20 million people at extreme risk of starvation.

One of the countries affected is Ethiopia, which has worked hard to prepare for the drought, but is now in the grip of the worst drought in nearly half a century.

“Ethiopia has been able to withstand drought for almost five years thanks to its restored lands which have shown great resilience,” said UNCCD manager Louise Baker.

“But the drought in the Horn of Africa is now very severe, so the land is not able to cope. You are making progress on the one hand, but the climate is putting such pressure on the land which has been restored,” she added.